Sustainable and Impact investing directs capital to enterprises that generate social or environmental benefits. Our findings challenge the myth that this kind of “social” investment yields weak returns that take too long to realize. With the fraying contract between society and business an urgent priority, many companies and banks are eager to find investments that generate business and social returns. One avenue is “impact investing,” directing capital to enterprises that generate social or environmental benefits—in projects from affordable housing to sustainable timberland and eye-care clinics—that traditional business models often sidestep.

in Our Thinking
4 min read

Mainstream investors often fear to tread on this terrain, leaving the field to adventurous venture capitalists and nongovernmental organizations (NGOs) who act as “first institutional investors.” While they see a clear upside in new customers and satisfied employees, they accept the conventional view that these investments can’t be scaled adequately to create attractive returns, carry higher risk overall, and are less liquid and thus tougher to exit. Impact investing may be forecast to grow to more than $300 billion by 2020, but even that would be a small fraction of the $2.9 trillion or so that will likely be managed by private-equity (PE) firms worldwide in 2020.

Our research in India—a testbed of new impact-investment ideas, where some 50 investors have poured $5.2 billion into projects since 2010 and investment is growing at a 14 percent annual clip—presents a different perspective. We tested four notions that have made mainstream investors shy. The findings suggest that as more companies and larger investors become acquainted with the true state of play, in India and elsewhere, they’ll find investment opportunities that align with their social and business aims.

The myth of lower returns

Impact investments in India have demonstrated how capital can be employed sustainably and how it can meet the financial expectations of investors. We looked at 48 investor exits between 2010 and 2015 and found that they produced a median internal rate of return (IRR) of about 10 percent. The top one-third of deals yielded a median IRR of 34 percent, clearly indicating that it is possible to achieve profitable exits in social enterprises.

Exhibit 1 shows some evident relationships between deal size and volatility of returns, as well as overall performance. The larger deals produced a much narrower range of returns, while smaller deals generally produced better results. The smallest deals had the worst returns and the greatest volatility. These findings suggest that investors (particularly those that have been hesitant) can pick and choose their opportunities, according to their expertise in seeding, growing, and scaling social enterprises. 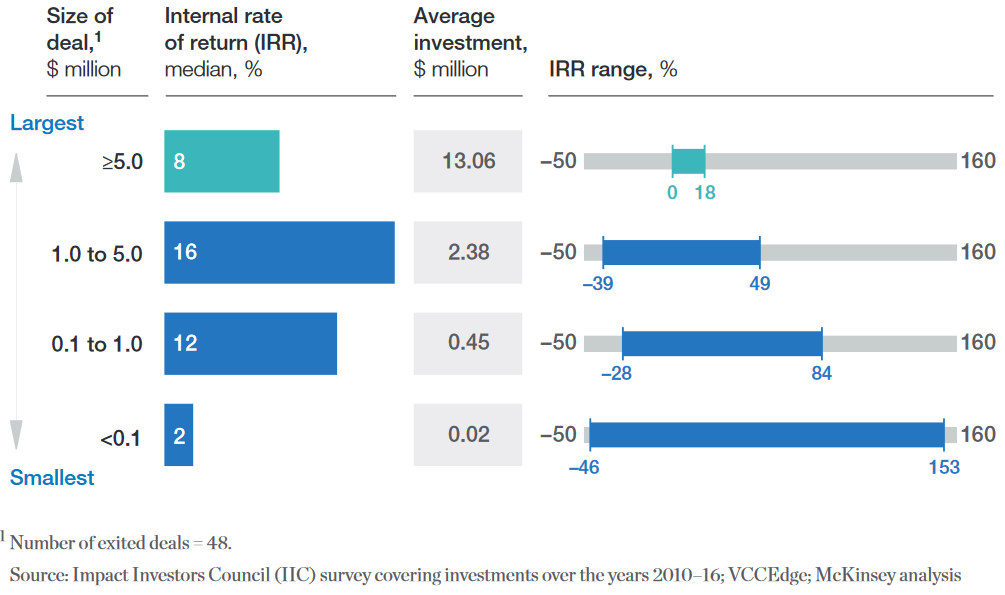 Capital doesn’t need as much patience as you think

Our analysis shows that both the mean and the median holding periods when investors exit have been about five years, no different than the holding periods for conventional PE and venture-capital (VC) firms. Deals yielded a wide range of returns no matter the holding period. Viewed another way, this also implies that social enterprises with strong business models do not need long holding periods to generate value for shareholders.

Conventional funds are joining in

Social investment requires a wide range of investors to maximize social welfare; companies receiving investment need different skills as they evolve. Stage-one companies need investors with expertise in developing and establishing a viable business model, basic operations, and capital discipline. For example, one investment in a dairy farm needed a round of riskier seed investment before becoming suitable to conventional investors.

Stage two calls for skills in balancing economic returns with social impact, as well as the stamina to commit to and measure the dual bottom line. And stage three requires expertise in scaling up, refining processes, developing talent, and systematic expansion. 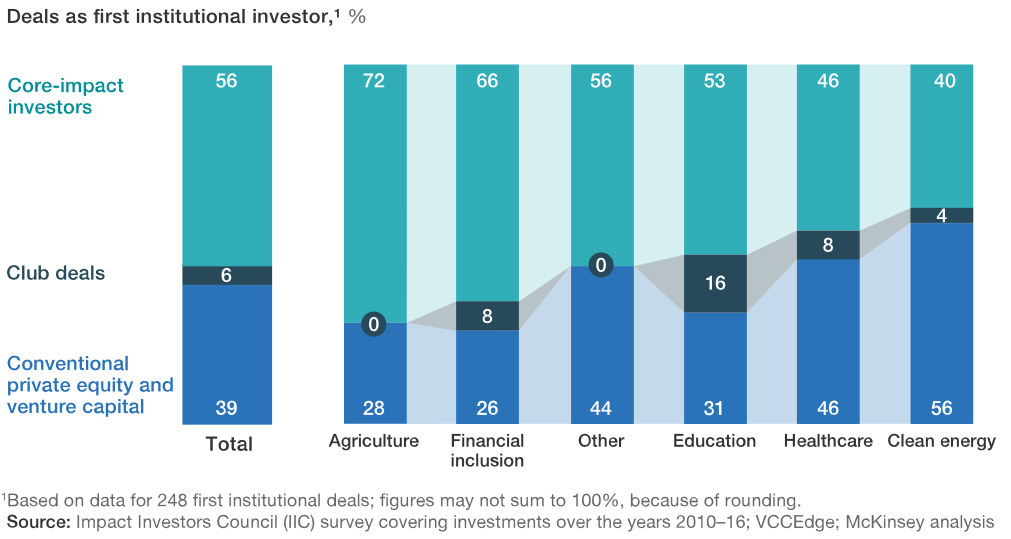 Core impact investors were the first investors in 56 percent of all deals (Exhibit 2) and in eight of the top ten microfinance institutions in India. Significantly, we found that this led to interest from conventional PE and VC funds, even as the business models of the underlying industries began to mature. Conventional PE and VC funds brought larger pools of capital, which accounted for about 70 percent of initial institutional funding by value.1 This is particularly important for capital-intensive and asset-heavy sectors such as clean energy and microfinance. Overall, mainstream funds contributed 48 percent of the capital across sectors (Exhibit 3). 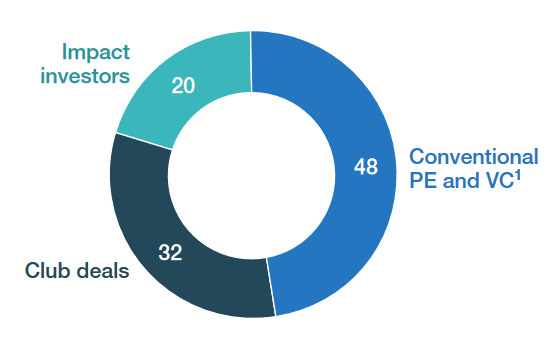 Club deals that combine impact investors and conventional PE and VC funds contributed 32 percent of capital and highlight the complementary role of both kinds of investors. As enterprises mature and impact investors remain involved, they are able to pull in funding from mainstream funds. Nonprofit organizations also play a complementary role by providing highly effective boots-on-the-ground capabilities. Nonprofits have typically been active longer than impact companies and have developed cost-effective mechanisms for delivering products and services and implementing business plans. Impact investors could be seen as strategic investors in nonprofits, which in turn play a role in scale-up, talent attraction, and the delivery of financial and operating leverage. One impact investor, for instance, built a sister organization to coach microfinance founders as they set out, and helped them build skills.

The social impact is significant

Impact investments touched the lives of 60 million to 80 million people in India. That’s equivalent to the population of France, a figure that is much greater than the proverbial drop in the ocean many imagine impact investment to be—more like a small sea. To be sure, India has vast populations of people in need. But then again, as social enterprises scale, so will their impact, reaching a critical number of at-risk people in smaller populations.

As investors reexamine their understanding of impact investing, the capital commitments they make are sure to expand. That will undoubtedly provide new challenges. But our research suggests that this nascent asset class can meet the financial challenges as well as achieve the social returns sought by providers of capital globally.