China – The Next Paradigms & Investment Opportunities

China recently celebrated 70 years of Communist party rule and its rise to global superpower status with a parade showcasing the country’s technology.....”.

by Sheau Pei Chong
in Our Thinking
7 min read

With contributions from: Barry Graham

China recently celebrated 70 years of Communist party rule and its rise to global superpower status with a parade showcasing the country’s technology, and a promise from President Xi that “no force can shake the status of this great nation”.

Looking 70 years back, China GDP was only at $59.7B. Then China was so poor and battered by civil war that some of its 17 war planes were reportedly ordered to fly by twice, to make the airforce seem larger than it was. This year’s vast parade emphasized how much has changed.

The country attained exponential growth in last two decades, reaching to $12.24T in 2019, a growth rate that have surpass United States, Japan and consumer spending are growing the faster than spending on India. The semi necessities and discretionary necessities, which are expected to grow around 5% a year, same as expected GDP growth. With its large population, consumers discretionary such as healthcare, transportation, education, e-commerce and luxury industries will be benefited by the rise of middle-class.

Zinqular Group’s – Research Center has identified the following investment grade themes as appropriate opportunities to discuss in this essay (based on solid data from our research center): 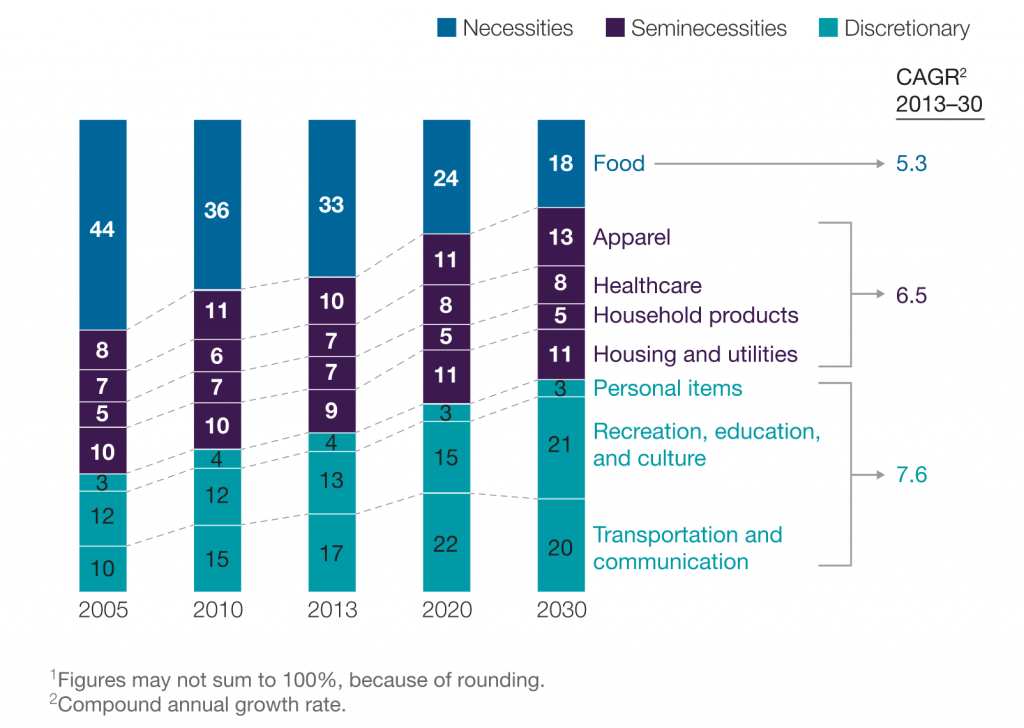 Traditional medicine and medical practice served the basis for health care in China for much of its history. When the communist took over in 1949, health care was then nationalized. Back then Chinese healthcare was supervised at national level, while local governments were responsible for funding and implementing the health services. Basic health and hygiene education helped reduce mortality rate and increase life expectancy in this period (first five decades of communist rule). The one-child policy was introduced from 1979 to 2015 to control population growth.  Since 2006, China has been undertaking health reform to provide health insurance schemes and to make healthcare services more affordable for its citizens. Under the “Healthy China 2020” initiative, the government is gearing its efforts to provide affordable basic healthcare to all residents by 2020.

The total health spending is expected to be around $1T by 2020 and more than double, at $2.5T by 2035.  The growing wealth and aging population are expected to play a large role in powering the health growth estimate. Although Chinese citizens are covered by local social health insurance, however such insurance offers less coverage for drugs and services due to budget constraints. With the increasing affluence and health-conscious population, the situation has created the demand for private insurance services to supplement the public insurance ones. According to E&Y, China health insurance market could reach $193 billion in premium income by 2030.

The growing middle-class population are demanding for a customer friendly healthcare environment, high quality services and to receive patient-centered healthcare. The current healthcare system is primarily composed of large public non-profit hospital; many of these institutions operate at low staffing low efficiency and low in hygiene. This has resulted lack of satisfaction among middle-class consumer-driven patients. China’s healthcare system will need to accelerate the reforms to better meet the demand of quality healthcare services. As government in its latest round of healthcare reform, an action plan released by China National Development and Reform Commission in February 2019, suggested that private capital can play a role in 3 main areas – hospital run by state-owned enterprises, specialized services and elderly care.  In addition, we project private health check-ups and private hospital would be rising rapidly as consumers demanding for more personalized and higher quality services. Figure 2 showed the national policy has encouraged the private sector to expand its role in the system. 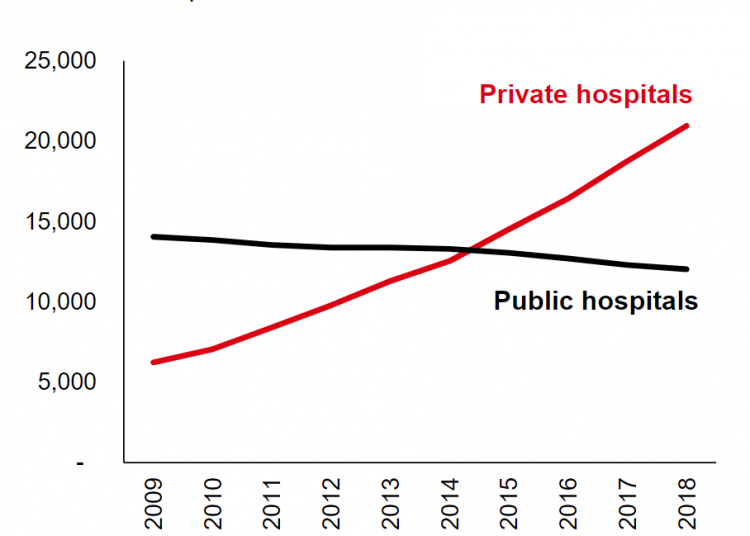 Figure 2: National Health Commission of the PRC, May 2019

This section only focuses on transportation on land. China national plan for current and towards the future have shown great commitment to cleaner and autonomous transportation. The traditional automotive industry is expected to shrink while electric vehicle (EV) industry will have greater growth in the coming years. China’s EV market has an annual growth of more than 90% between 2011 and 2017; driven by government policy, subsidies and investment. However, 95% of purchased EVs are from domestic OEM players due to government subsidies that were so far restricted for local produced vehicles. To improve the quality and competitiveness of the EV industry, Chinese authorities has showed signs of easing restrictions on joint ventures to attract more global players to invest in China. Rules capping foreign ownership for all auto ventures are planned to be lifted by 2022.  In addition, as EV sales have outpaced the charging infrastructure and efficient energy solution, we foresee opportunities for new entrants as well as existing players in their race to participation in this space.

Since 1950s, China has been providing nine-year compulsory education to its citizens. The education system in China geared towards economic modernization instead of ideological imperatives after the Cultural Revolution (1966-76). Science and technology became an important focus in 1980s. Under Deng Xiao Ping strategy for economic development, China has an outward looking policy that encourage learning from abroad for advanced training in wide range of scientific fields. Only till 1980s, the government allowed the established first private institution for higher learning.

The education industry will approximately be $0.5T in 2020. The rise of education spending has been supported by parents commitment to education and government policy aimed at improving international competitiveness.  Chinese private educational institutions have been the strongest growth segment, ranging from primarily to tertiary education as parents would prefer more personalized and high-quality education for their offspring.  Over 60% of middle-class parents place high value on Western overseas education so that their children can have better future opportunities. As parents prepare children for studies abroad, foreign languages education has benefited and gained its popularity. Other emerging trends include the growth of online learning platforms as well as the integrated online and offline platforms. From investment standpoint, there is an increasing in flow of private equity capital to accelerate the consolidation and evolvement of education industry.

The Chinese e-commerce sector has a brief history that continuously evolve quickly. In the early 1990s, China government information-based policy and the various projects initiated under this policy (e.g setup internet services, digital currency and electronic data interchanges system) enabled the foundation for e-commerce on the national level. The first internet company to provide services was created by Jack Ma in 1995, and the first online transaction was in the recent past 1998, however, e-commence sector has paved its way rapidly to today’s environment.

Currently, China has the highest global e-commerce transactions, reaching more than $2T of economic value. We expect e-commerce segment will continue to grow predicated on factors such as increasing internet penetration, greater disposable income and urbanization towards smaller cities, The geopolitical trade war (between US & China) have limited impact on their e-commerce industry. The National Bureau of Statistic forecast domestic retail spending will continue to rise by an average of 6% annually. Despite the e-commerce boom, the logistics and warehouse space in China are still undeveloped, only approximately 2% of warehouses in China have modern setup. Furthermore, the delivery market for both express delivery and last mile delivery would require companies to look into various more efficient solutions to accommodate this growth.

Luxury market a decade ago in China was rather limited where most of the luxury sales were for gifts purposes.  Luxury goods market generally includes shoes, clothing, jewelry, handbags, cosmetic, perfume, wines to watches. China luxury market was mostly supply driven; where consumers mainly purchase luxury goods in stores. Then global Luxury brand companies entered the China market and have since expanded their store footprints.

Driven by the explosion of upper middle-class household, China contributed to more than half global luxury spending from 2012 to 2018, reaching more than $23B. Luxury brands combine both online and offline channels to serve their consumers. China luxury is expected to reach $100B by 2025 according to China Luxury Report 2019. Two third of young luxury consumers gain their parents support for their spending. Upper middle-class parents with single child are willing top up their only bank balance, and young consumers like to spend big and on luxury. Brand is still the most important factor for luxury purchase, although consumers are starting to appreciate design, fabric and manufacturing process.  Beside young consumers, the elderly luxury market is of worthy attention. In 2018, it was nearly a 250 million citizens aged 60 and above (17.9% of total population). The silver generations like to travel, and spend on beauty products (skin, hair, clothes, watch) and they can afford it. We forecast the international and local luxury brands continue to emerge given government support in stimulation domestic brand and innovation.

China’s middle-class will continue to grow. This brings the direct demand to higher quality healthcare and educational services. In addition, internet infrastructure and rapid digital adoption enabled consumers to get goods and services conveniently via e-commence platforms will continue to increase.  With government national plan towards sustainability, there is raising demand for high quality EVs. Both millennia’s and silver generations with deeper pockets are in pursuing luxury brands and “experience”.  Such direct demand also leads to secondary demand for services such as the need for better healthcare insurance coverage, online education platform services, better sustainable infrastructure energy solutions for EVs, modern warehouse for e-commerce and efficient delivery services in the future.